When we think of Vincent Van Gogh, we think of the man who cut off his own ear in an episode of psychological pain. 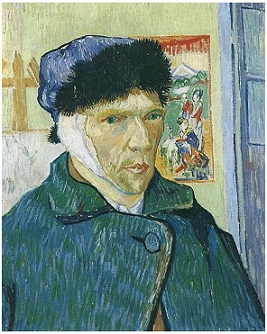 He gave us unforgettable artwork like Starry Night, but we can’t seem to separate his genius from his pain. Van Gogh was a man who suffered.

In this TED talk, Natalya St. Clair points out something amazing–in Van Gogh’s darkest hours, after he’d checked himself into an asylum after cutting off his own ear, he painted Starry Night. This painting is incredibly famous because it shows the sky in a series of swirls that catches at something inside of us. Ever wondered why?

The turbulence of the sky actually matches fluid turbulence–a natural phenomenon that even math can’t fully explain. But Van Gogh, in his darkest hours, painted it.

I find it amazing that Van Gogh’s psychological break, his depression, his tortured mind struck a well of genius. No other artists, even if they used that turbulent style, ever accurately portrayed fluid turbulence, but in his most difficult time of his life, Van Gogh was able to do it. Just a man in an asylum looking out a window. Did he realize what he was creating, or was he acting on instinct?

We’ll never know. But Van Gogh’s ability to project something he perceived in the natural world onto his art is my own goal in my writing. Even in romance writing–yes! 😉 I want my readers to be able to say, “Yes, this is how it feels!” I want there to be something that resonates deeply with my readers–something emotionally true in the patterns on my canvas.

His painting of the night sky proves that through the pain, there is strange clarity… something deeper and truer than we’d ever realized.