But he wasn’t. He was a man, certainly, but not a good one. He was a lost man, a frustrated man. He was now a father set up to disappoint his only daughter. He disappointed every woman who got too close, but if he was going to let a woman down, he’d rather it be with emotional honesty than pretending he was something he wasn’t.

And those beautiful lips, parted again as she drew in a breath to keep talking, were all he could think about. They were all he’d been able to think about for days now.

“I try real hard,” he said gruffly, and he dipped his head down and caught those lips with his–anything else she was about to say evaporating on her tongue. He felt a rush of relief to have finally closed that distance between them. He put a hand up to her face and kissed her gently as her eyes fluttered shut, and for just a moment, she sank against his chest. The store melted away around them as his lips moved over hers, and he felt her soft sigh against his face. Then she stiffened and pulled back.

“Gabe…” Her fingers moved to her lips, touching them as if burned.

“Sorry,” he said with a small smile. “I’ve been wanting to do that ever since I saw you again.”

“But–” She dropped her hand.

And he bent down and kissed her lips again. He was going to regret this–he knew that for a fact–so he might as well kiss her again. It could count as one big mistake. But this time as his lips met hers, she kissed him back, and his heart sped up at the realization. She felt this, too–it wasn’t one sided this time around. And while he knew he had very good reasons to be keeping a distance from this woman, he couldn’t quite remember them with her in his arms. She was so warm and soft and fragrant, and every single hope he’d held over the years seemed to tumble back into the room.

The bell above the door jingled and they both startled. Harped leaped from his arms. A blush blazed over her cheeks, and her scandalized gaze swept from Gabe to the newcomer.

“Oh!” Heidi pulled off her sunglasses and ran a hand through her short cropped, auburn hair. “I didn’t mean to disturb…”

Coming to a bookstore near you in August! 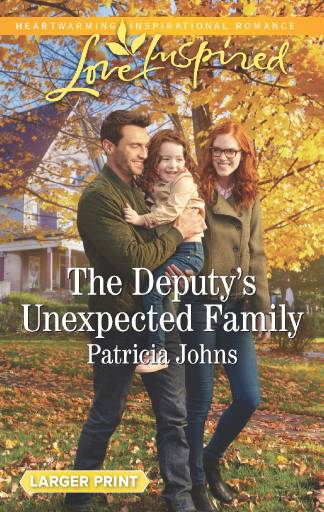 4 thoughts on “Excerpt from The Deputy’s Unexpected Family”