When we think Christmas, we imagine beautiful gifts, soft light, delectable food, happy kids… and it’s easy to get caught up the beauty around us. But this Christmas, a teacher in our community passed away, and my son’s class was hit especially hard. A lot of the kids knew her, even though she taught another grade, and she died so young.

So we had to talk about death with our sixth grader… more than just the death of a pet, but the death of someone in his circles. It just happened… there wasn’t much warning, and life went from being the fun, beautiful drive up to Christmas and suddenly became fragile and precious.

We talked about how we have to be ready to face God–all of us. We don’t know when our time might come, even though we pray to die at a ripe old age. We talked about how being a Christian means we have hope of Heaven, and this isn’t a final goodbye. And Christmas took on a different meaning in our home this year–a little more sober, and a little more grateful for what it means.

I don’t mean to bring you down… I just wanted to share what is happening in the Johns home right now. And I hope you’ll all remember that your presence here on this earth means the world to someone, and without you, more people would be affected than you could ever imagine!

Christmas isn’t always perfect, but when I remember why we celebrate, then Christmas doesn’t have to be perfect for me to feel the elation of the season. Merry Christmas! Let’s celebrate with those we love, and open our hearts to those less fortunate. Because we only pass this way once… and loving each other well seems like the best use of our time possible.

On Twitter, I follow a Catholic nun who has a skull on her desk. She keeps it there year round in a practice called Memento Mori, or the Medieval Latin Christian tradition of reflecting on your own mortality. This sister tweets daily about living her life as if each day could be her last.

It might seem a little morbid, but she caught my attention and I continued to follow her because she intrigues me.

We often think about how life seems to fly by when we look back on it, but we don’t like to think about how fast it’s moving in the other direction. It’s… unsettling. No one likes to think about dying. However, I do want to live a life of no regrets. When my time does come, I don’t want to look back and realize I missed the point of it all.

Often, we’ll see quotes and memes like this one: 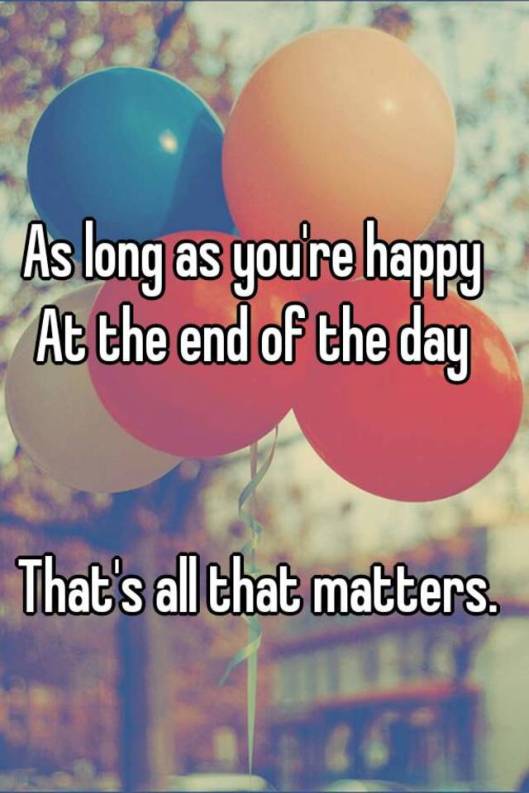 I disagree with it wholeheartedly.

My personal happiness is NOT all that matters. Especially if what makes me happy makes you miserable, or hurts you. We’re part of a community and caring for each other matters more than my passing happiness. So yes, there are some things that don’t infringe on anyone else, and I can say, “It doesn’t matter. I like it.” But there isn’t a lot in that category.

As a Christian, I believe in a bigger picture that I’m a part of. My choices matter, and how I treat others matters, too. If I put myself first and foremost, I have to face God with that on my conscience. I’d rather not.

And when I look at things like Sister Theresa Aletheia does, recognizing that life is indeed short, but my personal pleasure isn’t the end goal, then my choices will be different. But so will my levels of personal gratitude.

I’m not willing to go so far as to put a skull on my desk. I have a husband and son who wouldn’t like it at all. But I do like the reminder that life is short and I should treasure it.