My in-laws come from central Africa, so their way of saying things is different than I was used to. For example, talking about where you work is considered a very personal conversation topic, but discussing who you’re related to is like talking about the weather. So we all had a learning curve when getting to know each other after I married my husband.

The biggest adjustment was the casual discussion of weight.

Now, for them, pointing out when someone has gained or lost a few pounds is no biggie. They’d say things like, “Oh, look at you! You’re getting a little bit fat!” And I’d be stricken, and they’d wonder what they said wrong. “But she is. I don’t understand. Look, right here.”

Here in North America, “fat” has come to mean all sorts of things that have nothing to do with your BMI. “Fat” means ugly, unattractive, stupid, and not worth a lot of respect. If someone calls you fat, they are saying exactly how they feel about you, and it isn’t a compliment. Curvy, rounded, voluptuous and huggable: all fine! There is no shame in being plus-sized (which I am), but “fat?” No.

The thing is, in the country they come from, “fat” is not an insult. It’s an observation that points to the fact that you can afford to eat enough to put on some padding. Now, times are changing over there and Western ideas are taking over in some ways, so I’m not saying that things haven’t changed over the last couple of decades, but for the older generation from that part of the world, noticing how someone has put on or lost weight is a great indicator of how that person is doing. Losing weight? Maybe they aren’t doing so well and might need a little more family support. Gaining weight? Then they’re eating and their husband is providing. Well done!

It took me a long while to get used to this, but I have, and it’s been good for me. I used to be uncomfortable printing off pictures with me in them if I thought I looked bigger than I was used to being. (I yo-yo a little.) I’d think, “Oh no, I look too big there. I’ll print off some pictures that are more flattering,” and then not print off any because the camera doesn’t lie. But then I realized that looking “a little bit fat” doesn’t mean that I don’t look pretty, healthy or attractive. It’s a size, not an indication of my worth or beauty. So I started printing those photos off. Because that’s me, and I was there at that event, and I enjoyed myself and I posed with my family. That big smile means that I laughed at jokes and snuggled up to my husband and chased down my child. It means I ate a meal with the people I love and I even went for seconds. Because it was delicious.

The next time you look at a picture of yourself or get a glimpse of yourself in the mirror and you start to mentally criticize yourself, remember that there are parts of the world that don’t share our fear of padding. There are women out there who would be confused at your desire to be thinner. They’d say, “You’re getting a little bit fat! Oh, she’s pretty. Isn’t she pretty? You’re doing well.” And they’d hand you a plate.

And it would be delicious. 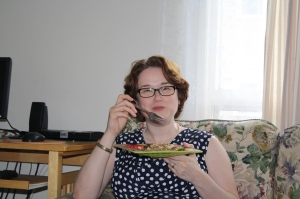